I found out I was pregnant in February 2013, shortly after booking a non-refundable all-inclusive trip, which is just how it goes. The pregnancy seemed normal until about 30 weeks, when I was diagnosed with Gestational Diabetes (GD). I stayed a patient of my OB, but I also stated seeing a high risk obstetrician. My GD was, thankfully, diet controlled, and the high risk doctor specifically said, “I’m not worried about you. You could go past your due date in my opinion and have no issues.” My regular OB, however, disagreed. And at 24, I didn’t know I could push back against the doctors recommendation, so I was scheduled for an induction at 39 weeks 6 days despite my body giving no indication of readiness.

The induction started around 6 in the morning with a nurse placing a Foley bulb. If you’re not familiar with that form of medieval torture, it is a balloon inserted into your cervix that is inflated to dilate you. The idea is that once you are dilated enough, the balloon will fall out. That’s all well and good, but sometimes you have a nurse who just tugs it for a few minutes until it finally rips out and you want to die. When the Foley bulb was placed initial, I was dilated maybe ½ cm. Once it was removed, I was a whole 1 ½ cm. Shortly after that horrid balloon was gone, they started the pitocin. I wasn’t progressing terribly quickly, so someone jacked up the rate. I went from ok and chatting with my husband to gripping the sides of the bed, shaking in pain in less than an hour. A very wonderful man finally came with a massively long needle and placed it in my back so I finally felt some relief.

After the epidural was placed, the nurse realized that my baby was facing upward, or sunny-side up. Babies are delivered like this all the time, but it’s more difficult and definitely more painful, at least in my opinion. (I had a midwife tell me later that a baby facing upward feels like it adds two pounds to the size of the baby.) The nurses had me roll from side to side, flipping every 30 minutes for three hours or so, trying to get him to turn face down. No dice. At around hour 9 or so of labor, I was at a 10. The doctor decided it was time to deliver, and nearly everyone in the room was telling me to push. Because of the pitocin, I couldn’t feel where the baby was, but I followed instructions and tried my best to push when told. For whatever reason, my baby wasn’t coming out quickly enough, and his heart rate dropped. The doctor then made the decision to use vacuum suction. She told me that I only had three rounds of three pushes to get him out, or we would be heading to the OR for a Cesarean Section. Round one: push one, nothing. Push two, nothing. Push three, nothing. Round two: push one, nothing. Push two, nothing. Push three, nothing. Then in between the second and third rounds, she did an episiotomy. I couldn’t feel pain, but I could absolutely feel her cutting me. I remember thinking, “Man, if I could feel this, it would hurt A LOT.” Round three: push one, nothing. Push two, nothing. Push three, baby finally comes out. I’m crying. He’s crying. My husband is tearing up. But doctors and nurses are running around trying to staunch the bleeding in my nether regions. I honestly have no idea how many stitches were there, but the doctor was down there for at least 40 minutes trying to fix everything.

At this point, I have lost a fair amount of blood and I feel incredibly nauseous, but a nurse tries to sit me up anyway. Thankfully, someone has taken the baby to do measurements and weight because I knew something was wrong with me. I sat up, vomited, and then felt the blood rush from my head. The only thing I could manage to get out to the nurse was, “I see more black than color,” and then I was out.

Eventually I came back around to a terrified husband and a fairly unimpressed nurse. After another hour or so, we were moved to a room. Once the epidural wore off, I wanted to crawl in a hole and die. The pain was unbearable. Pain medicine couldn’t touch the pain. The next morning, my OB explained that I had a 4th degree tear and warned me not to Google it. So I immediately did. Mistake.

We had friends and family visit us in the hospital, and all I could do is just cry from the pain. One sweet couple friend came to see our new bundle of joy, and I just cried. They offered to come back, but I just said through the tears, “Why? It won’t stop hurting if you’re not here.” While still in the hospital, the nurse made me go to the bathroom. I cried then too, though I apologized to her, having to stand with me in the bathroom while I sobbed. She was incredibly kind and acknowledged how awful it was by saying, “Honey, if anyone gets to cry, it’s you.”

After two days in the hospital, we left as a family of three. The ride home was excruciating. Sitting in a car for over 30 minutes was horrible. I tried to stay in bed as much as possible once we got home, but my sweet baby had jaundice, so unfortunately, I spent a lot of time keeping him in the sun, wrapping him in a biliblanket, or taking him back to the doctor. I cried every day the first few weeks from pain and sheer exhaustion. And you better believe I had tears when I finally had to go #2. My husband threatened to take me back to the doctor if I didn’t go. I held it for a week out of fear. All the Colace in the world wouldn’t have made that any easier.

For months after my son’s birth, I had pain. Move the wrong way, and I’d get a twinge of pain. Intimacy certainly wasn’t going to happen for months either. I eventually had my second child less than two years after my first, and I only had a second degree tear, which is cake compared to a fourth. It’s now been 4.5 years, and I am one of the lucky ones who doesn’t have any major lasting effects. Mostly everything works the way it did before, though I can feel where my scar is if I actually checked. I’m thankful my son and I are ok, but I wouldn’t wish that pain and recovery on anyone. 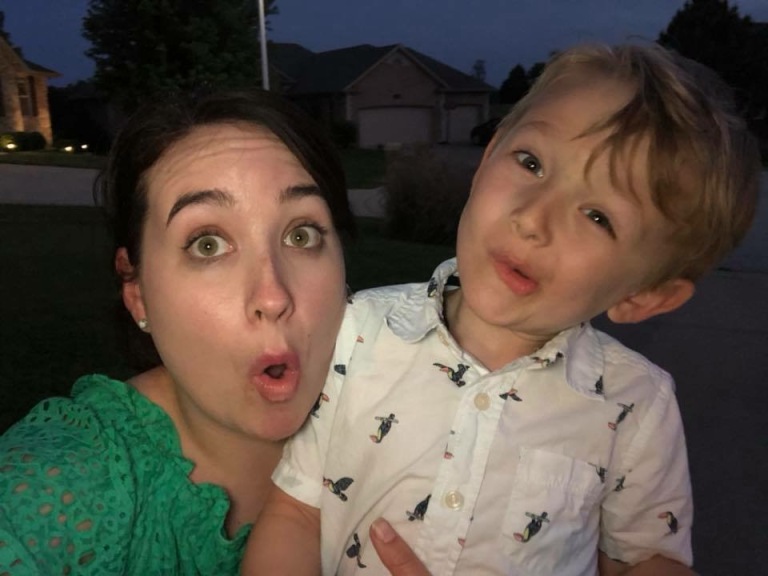